Families of Orchestra Instruments in the MIDI Hymn Project

One of the goals of the MIDI Hymn Project is to learn about the instruments of the orchestra and how to use them to voice a hymn.  The simplest of the techniques is answering the question, "Which voice (soprano, alto, tenor, bass) can this instrument play?"  As a class we explored two simple ways of knowing which instruments could play the voices of a hymn: (1) what is the size of the instrument and (2) what range of notes does it play?

There are four families of instruments in the orchestra: string, woodwind, brass, and percussion.

In a hymn, there are usually four voices: Soprano, Alto, Tenor, and Bass.

In Garageband, pitch designations are assigned with numbers: 0 means "as written", +12 means and octave higher (literally, 12 half steps), and -12 means an octave lower.  To make octave adjustments, open up the track editor by either clicking on a green region or the track editor button, which looks like a scissors.

In the string family, I used the following instruments, voices, and pitch designations:

In the woodwind family, I used the following instruments, voices, and pitch designations:

When we listened to the woodwind family by itself, the oboe was sticking out of the mix too loudly. We pulled back on the track volume of the oboe to help it fit back into the mix better.

In the brass family, I used the following instruments, voices, and pitch designations:


Finally, we panned the sound in Garageband so it would sound like it was coming from where the instrument in the orchestra was sitting.  How do you pan sound?  Every track has a pan knob.

Pan knobs let you direct the sound coming from Garageband to either the left or the right ear of your headphones.  Drag the pan knob up or down to turn it.  Then, imagine that you are the conductor of the orchestra and point the pan knob in the direction of where the instrument sits in the orchestra. Do this for all of the instruments in a family to spread them from left to right across the stereo spectrum of your headphones. 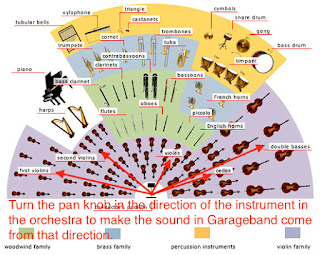 I haven't said a thing about how to enter notes in Garageband (I wrote how to do that in April 2014) , why I have four piano tracks in my project, or why we added percussion to hymns.  We first entered the notes of Glory Be to Jesus in four piano tracks, one track for each of the voices of the hymn. Why enter the music into four tracks and not all into one?  In order to have many different instruments playing the soprano part, it has to exist by itself in a track–it cannot have other voices with it.  I left the piano tracks in my final orchestra mix because the piano helps define the attack at the beginning of a note.  Some instruments (strings, woodwinds) have a very slow attack and feel behind the beat.

This year, I decided to have my students add percussion to their MIDI hymn projects because (a) percussion is an instrumental family of the orchestra, and (2) percussion makes the hymn come alive and propels the beat and the energy of the hymn forward.  The simplest way to add percussion is to drag in a loop of a beat from the loop menu.  We also added drum fills at the ends of verses to teach how a drummer changes the pattern at the end of a pattern to alert the listener that a new part of music is coming up.

Here's what my version of "Glory Be to Jesus" sounds like using the symphony orchestra jam pack from Garageband.

Wav, mp3, aif, aac, mp4... What are they? What's the difference between them?
Most people don't have to think about this topic, let alone these questions, but electronic musicians have to think about audio file formats every time they rip a CD to their hard drive, sync their iPod or phone, or play streaming audio over the internet. I'll explain each one of these file formats separately under three categories: "Uncompressed", "Lossless" and "Lossy".

UNCOMPRESSED AUDIO FORMATS
These two audio formats are what you would use if you want to preserve the highest quality of a digital recording. Neither one of these two formats compresses the audio in any way, but the tradeoff is a big file size: 9-10x bigger than and mp3 file size of the same song!
AIFF – short for Audio Interchange File Format (.aif), developed by Apple in 1988
WAV – short for Waveform Audio (.wav), developed by Microsoft in 1992.

LOSSY AUDIO FORMATS
Lossy compression is a data compression method which yields small file sizes, but from which the original data can never be totally reconstructed. Lossy compression will always results in generation loss: repeatedly compressing and decompressing a file will cause it to progressively lose quality. Lossy compression also applies to digital images.
MP3 - short for Motion Pictures Expert Group (MPEG-1) Audio Layer 3, developed in 1995
AAC - stands for Advanced Audio Coding
Pros: Designed to fix "serious performance flaws" in the MP3 format
Cons: some would view it as a proprietary format, only useable on iPods, iPhones, and other Apple Computer software, such as iTunes, but AAC files are compatible with Creative Zen Portable, Microsoft Zune, Sony PlayStation Portable (PSP), other portable media players, and mobile phones
WMA - stands for Windows Media Audio, developed by Microsoft in 1999

The final unit of Music Tech class is decidedly "non techy": it's learning how to play the guitar. Why? Many years ago the final unit was a songwriting unit using Garageband.  The students were encouraged to make their own song in Garageband using the loops that were provided.  The problem was that students stacked loops on top of each other that had conflicting chords.  How do I teach my students to hear chords? By teaching them to play chords on an acoustic guitar!

The goal of the guitar unit is to be able to play a simple three-chord song, even though during the course of the unit the students have learned five chords: G, C, D7, A7 and Em.  It reminds me of a (somewhat) famous Youtube sensation, Axis of Awesome's 4 Chord Song.  The idea is that if you know four basic chords: I, vi, IV, V (in G: G, Em, C, D) then you can play almost a thousand songs.

How many songs can you play with only three chords? Many, many, many!!

10 Famous Songs with Three Chords or Less via Guitartricks.com

Lord, I Need You (Chris Tomlin)


Some websites will even help you with strumming patterns:

Posted by Unknown at 6:35 AM No comments:

Posted by Unknown at 8:30 AM No comments:

Click here to listen to my audio file of Dance Project 1.

Posted by Unknown at 7:12 AM No comments:

How to Link from Google Drive to Your Blog

How to link your Dance Project 1 audio file to your blog:
9. Paste in the link that you copied from Google Drive.  Click "Test this link" to make sure it works. Then press "OK"

10.  Go back to your blogger article and click the orange "Publish" button to see a live version of your newly created link to your song.  Click on the link to make sure it works and that anyone can listen to your song.

Now start typing about what you did and learned in Dance Project 1.  What should you write about?
Posted by Unknown at 6:23 AM 1 comment:

WAV vs. MP3 as Explained to a Fifth Grader

I made this presentation to explain the difference between WAV and MP3 files.  I tried to make it simple enough that a fifth grader could understand it. I hope you enjoy my presentation!
Posted by Unknown at 8:46 AM 3 comments: